One of the most extensive research studies entitled “Track the Success” conduced in German-speaking countries (Germany, Austria, Switzerland) in 2021 focused on viewers’ perception and reaction to media content on major video platforms - linear TV, BVOD, YouTube and Facebook and the impact on audio visual ad consumption.

At a conference organised by the Association of Commercial Television in Prague last autumn, the study was presented by Stefan Schönherr from the global research company Eye square and Daniel Reiner from Screenforce, which associates TV marketers from all of the three countries. Its 12 members represent 95 percent of the entire TV ad market in the region.

The study focused on examining three basic processes in content viewing - ad perception (visibility, sound setting, etc.), reaction to the viewing (changes in physiological processes, emotional response, etc.) and the resulting impact (ad recall, impulse to buy). The modern technologies of Eye square were a great support to the study.

The authors of the study sought to create the most natural environment in which participants consumed the content. While linear TV was watched on a big screen, for BVOD and YouTube it only accounted for half of views and the other half of adverts were watched on smart phones. In case of Facebook, half of ads were optimised for smart phones while the other half of them were not. In both social networks, viewers were able to scroll the screen, share posts, etc. The research had a specific feature: on YouTube only unskippable ads were used to make the comparison fairer.

As Daniel Reiner mentioned, the US video library Netflix is, of course, a significant player in the field of video content. However, it was not included in the study as it is ad-free.


TV has its advantages and it is good to remember them

One of the questions asked in the research related to the unaided ad awareness, i.e. what brands and their ads the respondents remembered after they had seen the relevant media type. The best results in this respect were achieved by linear TV where ads were remembered by more than half of people (55%) followed by BVOD (44%), while the unaided awareness on YouTube and Facebook was around 30 percent.

Another question related to aided ad recall. Again, TV was the most successful with 60% together with BVOD (57%), while YouTube reached 47% and Facebook 43%. 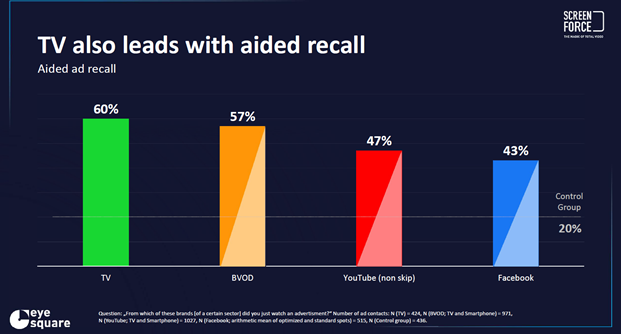 In the declared purchase intention, the results were more even. TV and BVOD achieved 26%, YouTube 23% and Facebook 20%. However, human behaviour is affected by multiple factors in this category, including the ad’s creative. 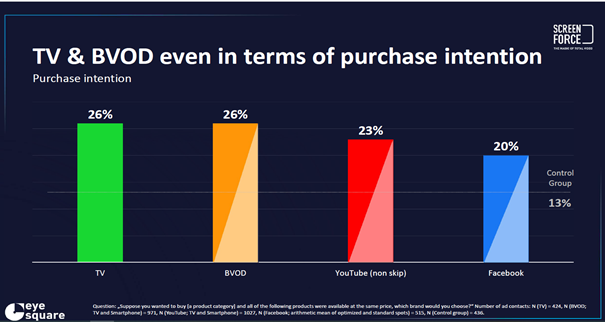 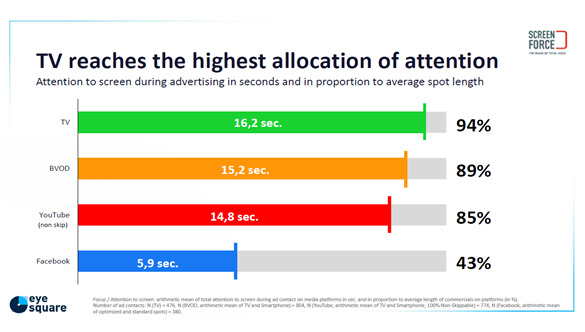 The research also focused on emotions raised in respondents by ads. Positive emotions were again driven most by TV with the average length of 5.1 seconds followed by BVOD (4.9 seconds), YouTube (4.4 seconds) and Facebook (1.2 seconds). 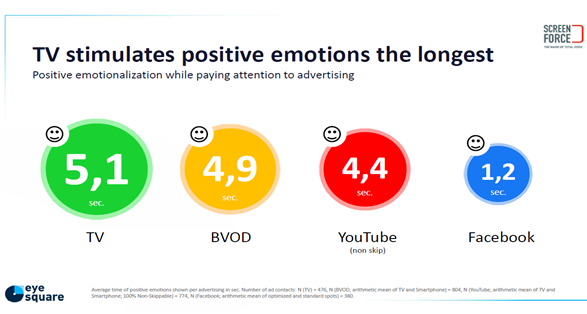 The difference in viewer emotions at a move from content to ad consumption is also an interesting finding. Emotionalisation is again the most stable on TV and BVOD, where the drop was 2 pp or 3 pp, respectively. In case of YouTube, the decline was 5 pp, on Facebook even 21 pp. 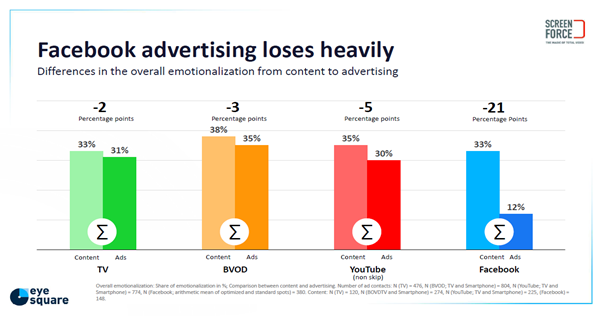 The most exciting ads were those on YouTube (5.69 seconds) and BVOD (4.55 seconds), TV is the calmest medium.

Attention was also paid to the differences in content consumption by the device used (TV screen or PC screen vs. mobile phone). This related to BVOD and YouTube where half of content was consumed on a big screen and the other half on mobile devices. While BVOD showed a very low difference in aided ad recall between the two types of screens (58% vs. 55%, difference of 3 pp), YouTube on smart phones lost 20 pp compared to the big screen (57% vs. 37%). This is because only 8% of ads on YouTube consumed on smart phones are watched in full-screen mode (while for the big screen it is 100%). BVOD consumers always, i.e. including consumption on mobile phones, watch ads in full screen. 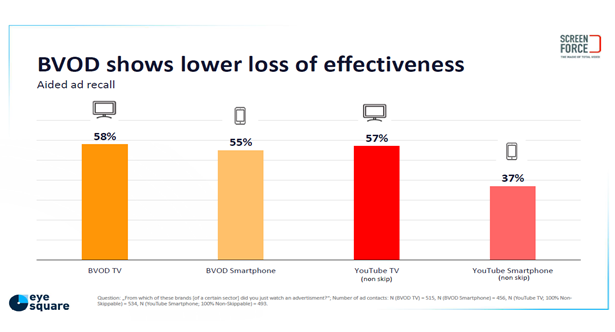 Why not omit TV in the media mix

As Daniel Reiner said, each of the platforms has its importance for ad message delivery; however, the impact of TV and BVOD is most significant. The study clearly shows that ads run on linear TV and BVOD achieve better results. This applies to the unaided and aided ad recall as well as to the purchase intention. What is the specific advantage of TV compared to YouTube and Facebook, which was always the last of the four platforms monitored?

According to Stefan Schönherr, the crucial fact is that videos on YouTube and Facebook get less viewer attention. One of the reasons is that not all consumers watch videos including ads in full screen. While on TV and BVOD, full-screen mode was used in 100% cases, on YouTube it is used just at 59% and on Facebook even 16%. Another fact having a negative impact on ad consumption on Facebook is the automatic video start with no sound. Only one third (34%) of people turned the sound on when consuming ads during the research. On other platforms, the sound was on all the time.

These factors affect the total ad visibility in proportion to the length of viewing. TV has 100% visibility and BVOD 99%. YouTube achieved 96% (but only in unskippable ads) and Facebook only 52 %. This is because people scroll the screen and may miss the ad.

In general, TV is perceived as a medium for relaxation and similar emotions persist while watching TV ads. Similar mood is reported for BVOD viewers although they can select what they watch. On YouTube, people are more negative about interrupting content with ads and find it more disturbing, especially when consuming short-form content on mobile phones. On Facebook, people primarily scroll and their perception of content is more superficial. It is crystal clear that TV still plays a significant role in the media mix. As it still succeeds in keeping most of consumers’ attention when they watch ads, TV remains the indispensable channel in building brand awareness and reach.

The “Track the Success” study conducted in German-speaking countries last year was unique by its scope. There were 549 participants and 12 advertising creatives that were the core of the research. In total, respondents were exposed to 3,444 ad messages that were analysed.

During the consumption of the ad message, respondents’ screens were recorded, including scrolling, sound setting, etc. Using web cameras and AI, it was recorded whether a participant pays attention to the screen. Participants’ reactions were captured using a special software identifying types of emotions by facial expression. It was supported by measuring the level of stress through a device placed on participants’ wrists. The impact of the ad consumed was identified in a traditional way, based on a qualitative survey.

Ads on TV, BVOD, YouTube and Facebook were run in a usual, natural environment, i.e. with the option to scroll or share on social networks, etc. Respondents spent 20 minutes on every platform.

The research also monitored the role of the second screen, the differences in content consumption in various age groups and the opportunities to use video content in OOH media.