Skip to content
HOME NEWS RESEARCH SHORT READ
Although linear TV has still been a powerful source of video content viewing, online video on demand viewing is expected to grow further in the coming years.

Prima TV Group expects that the reach of linear TV in the Czech population will decline while online video consumption will grow. Prima’s CCO Vladimír Pořízek said that at a meeting with partners on the occasion of the presentation of AdCross, a tool for joint TV and online advertising measurement. He showed clients data based on a survey Češi v síti (Czechs in the Network) carried out by Kantar last year.

The survey indicates that linear TV has still been the dominant way of viewing video content (69%). In recent years, video viewing on social networks (44%) and video portals such as YouTube (37%) has been growing and also SVOD consumption has been rising. About a fifth of the Czech population aged 16-65 has a subscription. By 2023, a slight decline in linear TV and a further growth in the above mentioned online videos, including free online video, are expected based on the data.


This year’s data from the official audience measurement by ATO-Nielsen Admosphere indicate a year-on-year reduction of linear (live) TV by about 10%, explained Prima’s CCO.

According to Kantar research, TV accounts for 50% of video viewing every evening (6 pm to 24 pm). Online video on demand as a pay service (SVOD, TVOD) is watched by 14% of population (in TG 15-69). In the younger population aged 15–39, TV accounts for 39% of all video consumption in the evening; a portion larger than in the general population is attributable to online video. 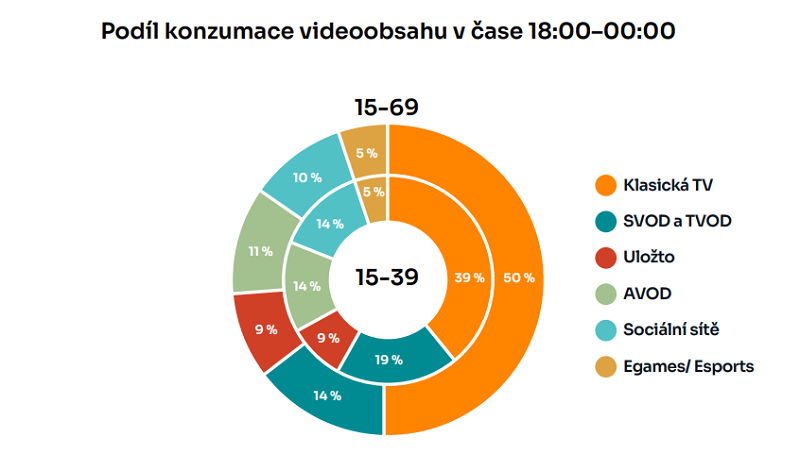 
Although live TV viewing has still been the key source of TV content viewing (83%), the share of time-shifted TV viewing has been growing every year. This year, it represents nearly 17% in the general population of viewers aged 15+. In younger viewer groups, its share exceeds one quarter. The share of time-shifted viewing has been rising rapidly in IPTV, currently accounting for 60% of the total viewing within IPTV, said Pořízek referring to the data of ATO-Nielsen Admosphere.

ADVERTISING’S ROLE IN THE VIEWERSHIP BATTLE.