In order to examine the increasingly complex world of moving images, Screenforce is playing with an “individual user situation”. A study called “Mapping the Moods”, conducted by the market research institute eye square, highlights the relevance of context in media usage.

Screenforce explains the research task assignment by the fact that context is a hot topic in media agencies. “For media planners it is increasingly important to understand how moving images are used in order to better target advertising and optimise its effect,” says Screenforce, promising nothing less than “the first comprehensive survey of the video environment in Germany”.

“Mapping the Moods” is a follow-up to last year’s “Track the Success” study in which Screenforce aimed at providing evidence that the situation of perception has a crucial impact on how advertisements are perceived and what effect they have. Scientists from eye square have identified 10 typical usage patterns (Moods) that go far beyond time of day and genre and include psychological components of video viewing.

What video offer is used, by whom, when, how, why and with whom, in what mood the viewer is and what they are doing in parallel - these were the questions of a detailed research diary (Module 1), which was combined with a representative online survey conducted on its basis (Module 2). The combination of time of day, genre, concentration and motive resulted in 10 distinctive patterns of video usage:

Key findings of the study:
Most audiences experience these moods (Moods) on a regular basis and thus they are all equally relevant. 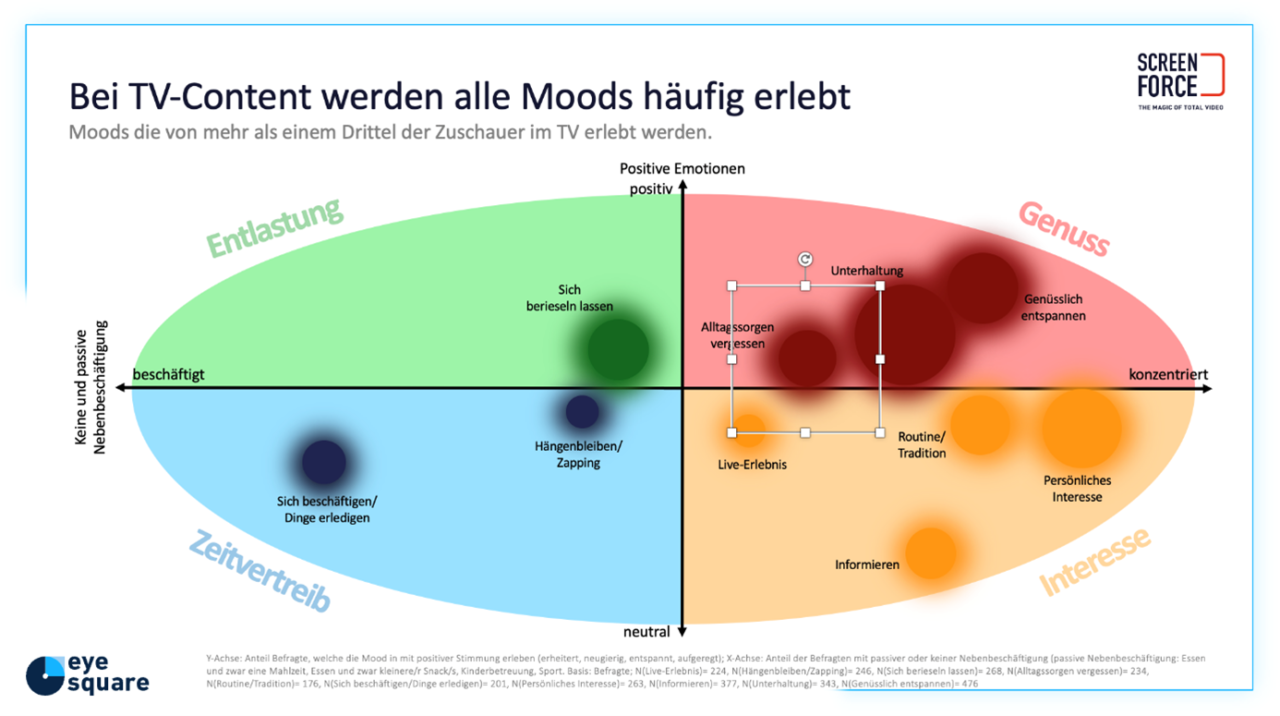 Moods experienced by more than a third of (linear/classic) TV viewers:

A SVOD (Subscription-Video-on-Demand) service was relevant just to the Moods of “Entertainment”, “Delightful relaxation” and “Forgetting about everyday worries”. This covers a considerably smaller spectrum of video viewing.

In general, the study confirms that the environment is favourable for advertising: video is watched largely in a good mood. The key message of the study is that namely live TV broadcasting successfully covers the motives for video usage; SVOD services are less successful, which has consequences for optimised ad planning.

Malte Hildebrandt, CEO of Screenforce, comments: “For media planners it is increasingly important to understand how viewers consume and use video in order to target advertising and optimise its effect more precisely.” Considering these usage patterns thus may be a useful complement to media planning.

In addition, the authors of the study emphasise that the data collected are also useful for TV and streaming service providers. They will help them improve the current video offering, offer content in the right places and increase viewer satisfaction. 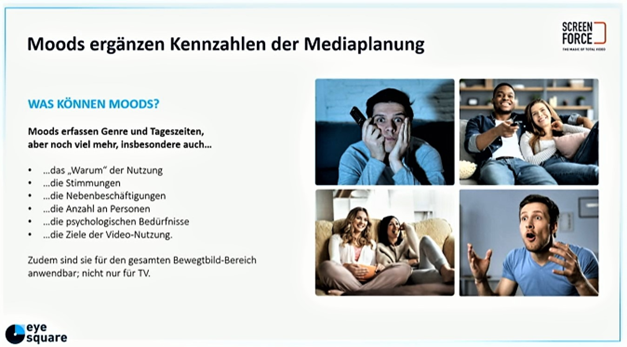 What can Moods do?

Moods include not only genres but also time of day and much more, predominantly the following:


Moods are applied to all video content, they are not restricted to TV.
In the following year, a follow-up study will explore the connection between creating spots, the Moods and ad effects.
Additional research will explore the issue of psychological function of these usage patterns. The results are expected to be published in September 2022. Screenforce’s research will further focus on the impact of advertising in order to gain new insights into which spots have a particularly strong impact in which moods.

Information on the study and a presentation is available at Screenforce.de.
Loading more ...