Skip to content
HOME NEWS RESEARCH
Data from Nielsen Atmosphere research shows how media consumption in summer evolves compared to the rest of the year. We listen to the radio more often in the summer, while go to the cinema and watch TV content less.

More than four-fifths of respondents (83%) consume media at least occasionally during the summer months (June to August). The majority of them (66%) watch media as often during the holidays as during the rest of the year. Less frequent media consumption during the summer is reported by 25% of respondents and more frequent by 9%. Respondents without a high school diploma (72%) declare less media consumption over the summer compared to those with higher education, those from villages (77%) compared to larger municipalities and those from Bohemia (78%) compared to other regions. This is according to a Nielsen Admophere survey for MediaGuru.cz.

The youngest age group, 15-34 years old, chose to consume media more often during the holidays (13%) compared to older age groups. Conversely, lower media viewing was more often reported by women than men (27% vs. 24%), people with a college degree (28%) compared to those with lower education, and respondents from large cities (30%) compared to smaller villages, and less often by respondents over 55 (21%) compared to younger respondents.

The medium that people consume the most in summer (June to August) compared to the rest of the year is radio. By a smaller margin, TV and video content (from archives), magazines, cinema and streaming music (e.g. Spotify) follow with equal scores. Conversely, we watch less TV content (live and reverse) in the summer than at other times of the year and go to the cinema less. Radio and streaming music have the most stable consumption during the summer compared to other months of the year. 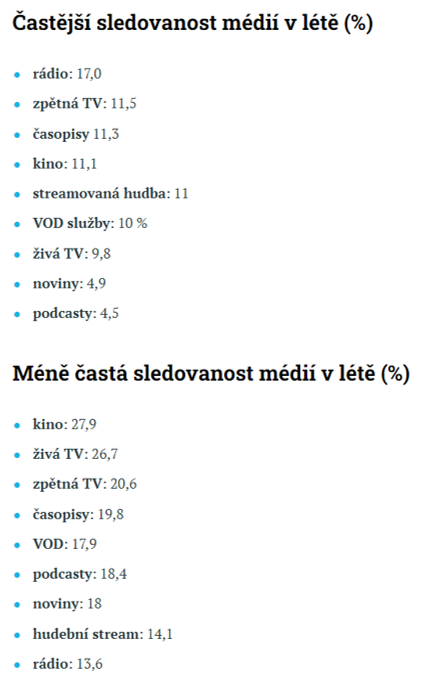 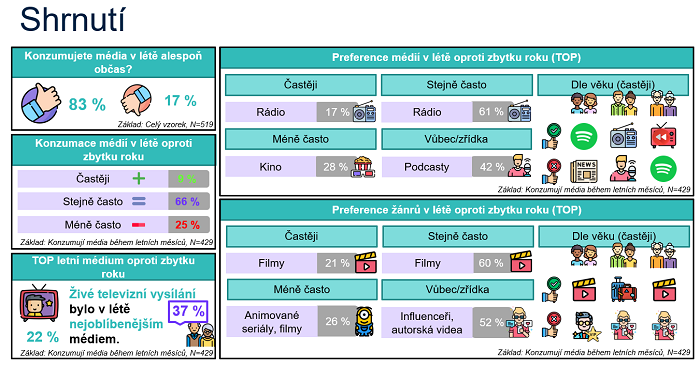