Skip to content
HOME NEWS SHORT READ
Nova will bet on new series of Policie Modrava, Pan Profesor, Specialisté or a new series of the cooking reality show Masterchef in autumn. Completely new shows are also in the pipeline.

New, fourth series of the series Policie Modrava, premiere episodes of the second series of Pan Profesor, new episodes of the series Specialisté or a fresh series of the cooking show MasterChef Czech Republic. Two new series from the creative workshop of the directors of Biser A. Arichteva, Tomáš Pavlíček and Marek Najbrt - O mě se neboj with Veronika Arichteva or the comedy crime drama with Tatiana Dyková Případy mimořádně Marty. These are the main Nova TV news for this autumn season. Nova presented its programming schedule on Thursday afternoon at the Červený Jelen restaurant in Prague.

The fourth season of Policie Modrava will be the audience's draw on Sunday evening. The stories from the Šumava region with a criminal plot attract viewers' attention. The last third series broadcast in autumn 2019 was watched by an average of 1.9 million viewers (15+) with a share of 45.7%. The main heroine of the new episodes remains the criminalist Jana Vinická, played by Sonia Norisová, and her investigative team consists of Filip Tomsa, Jaroslava Stránská, Zdeněk Palusga, Michal Holán, Matěj Dadák, Jan Monczka and others.

From September, the series Pan Profesor will also return to the screens of Nova. Vojtěch Dyk and Beáta Kaňoková will again play the main roles in the second series. The broadcast day will be Thursday again, the first episode will be broadcast from 1 September. The first series offered a total of 14 episodes last autumn and was watched by an average of 884 thousand viewers (15+), with a share of 28.6% in the key group for TV Nova 15-54. The series Pan Profesor is set in a school environment at a Prague grammar school, but also focuses on the private lives of students and teachers.

The cooking reality MasterChef Czech Republic also proved its worth last autumn. That's why its broadcast time has not changed, which is again twice a week - on Tuesdays and Wednesdays at 20:20. It will launch on Tuesday, August 30. The judges are again Radek Kašpárek, Jan Punčochář and Přemek Forejt. Last year's autumn series of MasterChef became one of the most successful shows on TV Nova's offer. In the 15-54 audience group, it scored an average share of 30.5%.

Tuesday's MasterChef will be followed by the second series of Souboj na talíři, featuring the judges from the aforementioned cooking show. In its traditional Monday slot, the Specialisté series will present new episodes. The quiz show Na lovu (Saturday), the reality show Love Island (Wednesday) and the late-night show Ulice also continue. Nova will also broadcast the Český slavík music awards in the autumn. On the other hand, Výměna manželek will not appear in the programming schedule and the series Ordinace v růžové zahradě will continue on Voyo. 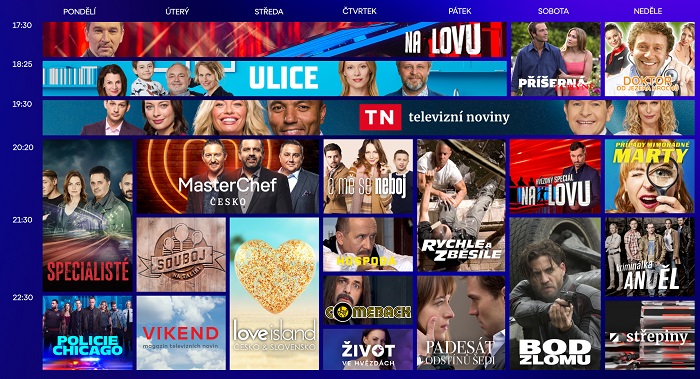 Compared to last autumn, the skeleton of the programme schedule remains basically unchanged. "In addition to the continuation of the programme stalwarts, this year we will also offer two brand new feature series with a focus on the whole family. Thus, Nova TV confirms its current position as the largest producer of feature films in the Czech Republic and we will significantly strengthen this status in the coming seasons. We are already working on it in production," said Silvia Majeská, programme director.

Nova also said that there are dozens of new projects in development and production for the coming months. Dozens of original fiction projects are currently in development and production for 2023 and future seasons, including TV Nova's first ever period series with the working title Obchodní dům , the return of Kriminálka Anděl or the family series Jedna rodina from the pen of Lucie Konečná, who was behind Ordinace v růžové zahradě 2.

The thematic stations of the Nova Group have also presented their programming scheme. Further information on the Nova TV group's programme, including the Voyo platform, is available here.

ADVERTISING’S ROLE IN THE VIEWERSHIP BATTLE.