Skip to content
LONG READ NEWS TRENDS
Without the battles of Pepsi vs. Coca-Cola, McDonald’s vs. Burger King and KFC, Adidas vs. Nike, the world of advertising would have missed out on many interesting moments.

While history is full of competing brands, few compare to the battles between beverage giants Pepsi and Coca-Cola that began in the century before last and have greatly influenced the direction of modern marketing. We can also make similar comments about the battles between McDonald's and Burger King or KFC in the fast food arena, as well as between the sporting brands Adidas and the visionary Phil Knight's Nike.

Coca-Cola, which has been around since 1886, has rarely been on the defensive more. In the brand's early days of advertising, it embodied classic America, and Coca-Cola capitalized on that during World War II, for example, when soldiers fighting in Europe craved the drink as a reminder of home.

Pepsi began in 1893 as Brad's Drink and was an innovative challenger on the marketing front. For example, it was behind a revolutionary radio "jingle" with instructions on how to get more drinks for the same price. It was broadcast by hundreds of radio stations and was heard during the World Series finals in baseball. Pepsi's own identity has gradually shifted towards music, most recently sponsoring a halftime show during the Super Bowl finale featuring a plethora of music stars for the last ten years. 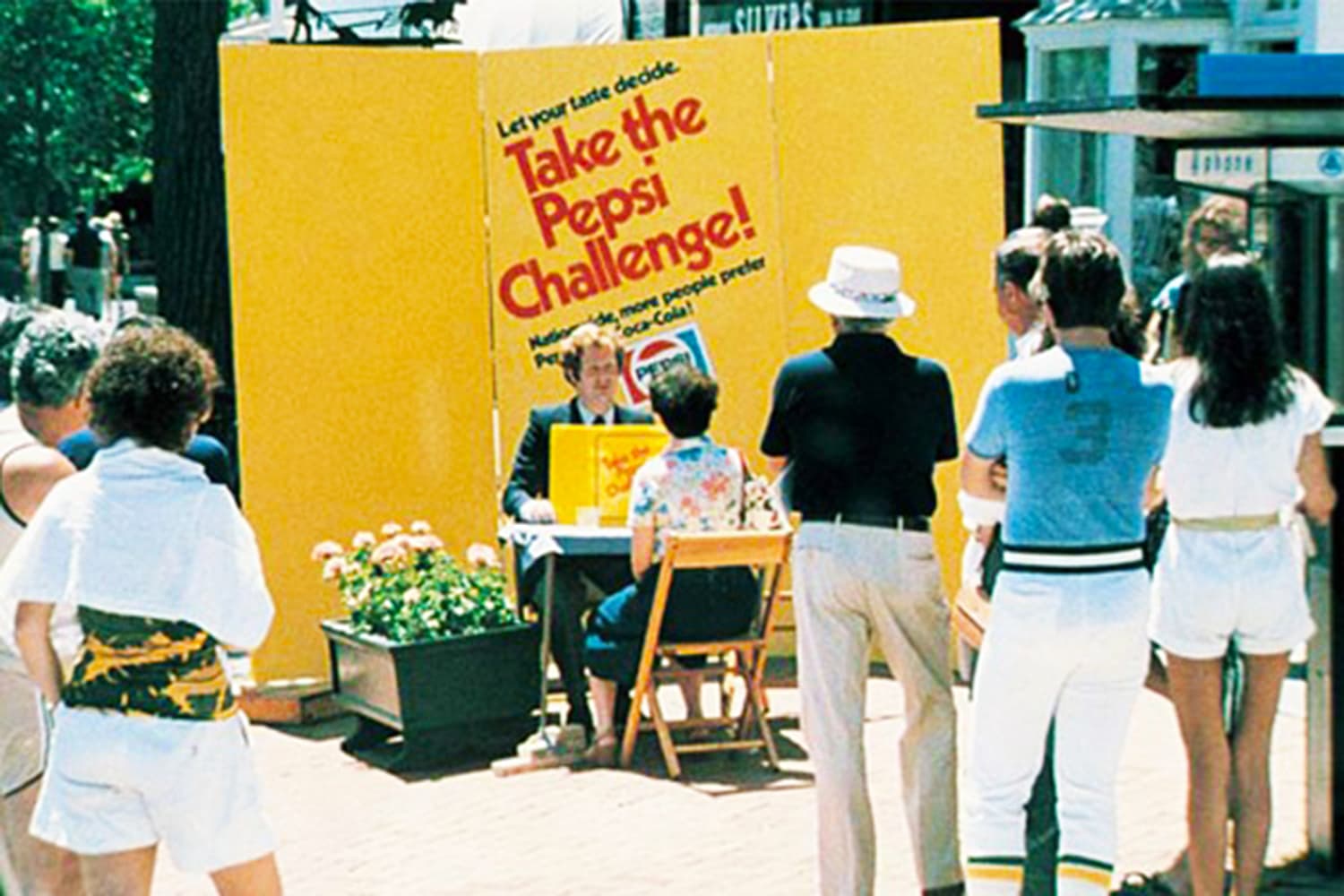 According to the book "The Cola Wars," in 1963 Pepsi put $36 million into the "Think Young" brand platform. After a year of operation, the so-called Pepsi Generation concept emerged, targeting the younger generation and helping to confirm the duo's clear role in the market. In 1975, it came up with the "Pepsi Challenge", a simple but brilliant idea. The brand conducted blind taste tests and most participants said they preferred the taste of Pepsi to Coke. This successful campaign worked for many more years and helped settle the contest.

Coca-Cola was not used to taking a reactionary stance and its response to the Pepsi Challenge was not very successful. In response to declining market share, Coke came up with a "New Coke" in 1985 based on market research. It wasn't a great success and Classic Coke returned to the shelves after a few months. And Coca-Cola understood that the battle was not about taste, but about the inherent strength of the brand and the things associated with it.

Big battles have been going on in the fast food arena for over half a century between McDonald's and Burger King and KFC. The cards are clearly dealt, with global number one McDonald's having about twice the number of restaurants, five times the advertising budget and ten times the revenue. McDonald's was founded in 1940 by brothers Richard and Maurice McDonald in San Bernardino, California. 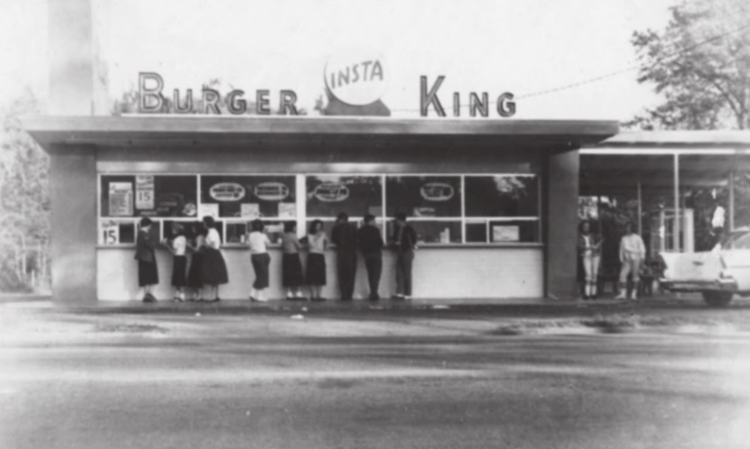 In 1948, the brothers launched the Speedee Service System, using the principles of the production line to create a fast food concept. Franchisee Ray Kroc joined the company in 1955, bought out the brothers in 1961, and a year later introduced the yellow arches in the company logo. A visit to a McDonald's in California in 1953 led to the founding of Burger King. The brand opened its first Insta-Burger King location in Jacksonville, Florida, and after bankruptcy and new owners, it was renamed Burger King in 1959. 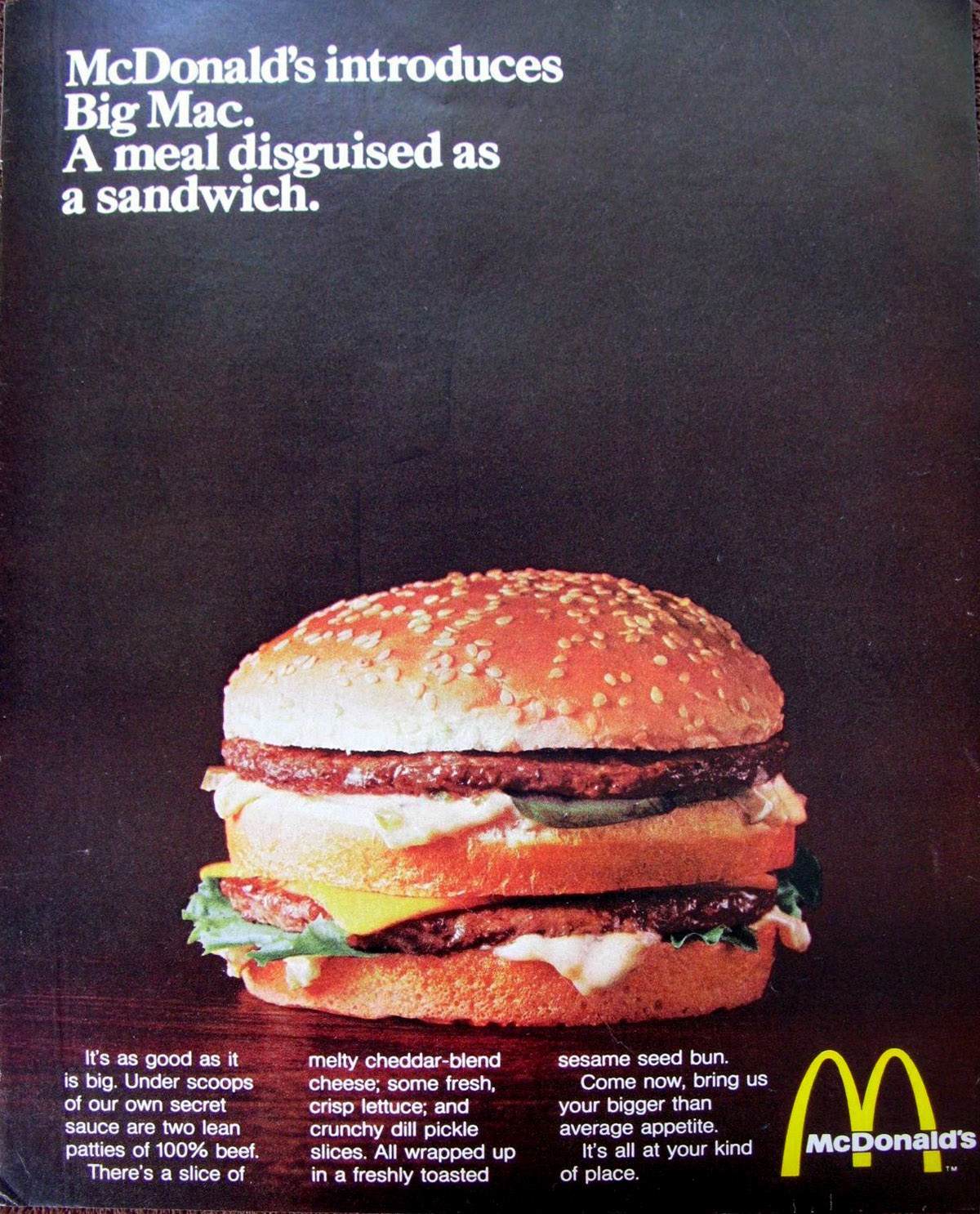 The success of McDonald's inspired a plethora of followers who wanted to replicate the concept by differentiating the product offerings and a different brand identity. Wendy's, Chipotle and others. McDonald's television commercials focused on their mascot Ronald McDonald, who debuted during the 1965 Macy's Thanksgiving Day Parade and the 1966 Super Bowl. At the time, the company also laid the groundwork to create marketing budgets by having all franchisees contribute a percentage of earnings beginning in 1967. The budget thus grew rapidly from the original five million dollars to 60 in 1974, and the chain became one of the largest advertisers.

At the center of the menu was the popular Big Mac. Burger King then built its brand identity in contrast to the leader, merging with Star Wars in the 1970s. Significantly, Burger King swung into action in 1985 with a $40 million campaign (McDonald's was spending at least twice as much), "Where's Herb?" centered around a fictional character named Herb who had never eaten a Whopper.

McDonald's worked with Needham, Harper & Steers from 1970 until 1981, after which the brand moved under Leo Burnett USA. The chain moved back to DDB Needham Worldwide in Chicago in 1997. The next competition was won by Heye & Partner, DDB Worldwide's German subsidiary, which came up with the theme "I'm lovin' it" featuring the iconic theme from a Justin Timberlake song that the company had used for nearly two decades.

Burger King has entered the new millennium with the Crispin Porter + Bogusky agency. They focused on the boom and potential of social media and the operation of music and gaming branding at a time when it was gaining in popularity. McDonald's, meanwhile, had been very successful in developing the McCafe concept. In early 2020, Burger King came up with the since multi-award-winning (both at Cannes and the Clio awards) "Moldy Whopper" campaign to show that it was meat without preservatives.

At McDonald's, New York-based Wieden+Kennedy is now the lead agency. The agency created the "Famous Orders" spot for the Super Bowl in 2020, which became the basis of a platform of the same name featuring pop culture celebrities, which it uses to drive sales and app downloads.

Burger King countered with a "Keep It Real Meals" campaign and real celebrity names instead of their artistic ones in reference to real ingredients and a sequel to Mouldy Whopper. 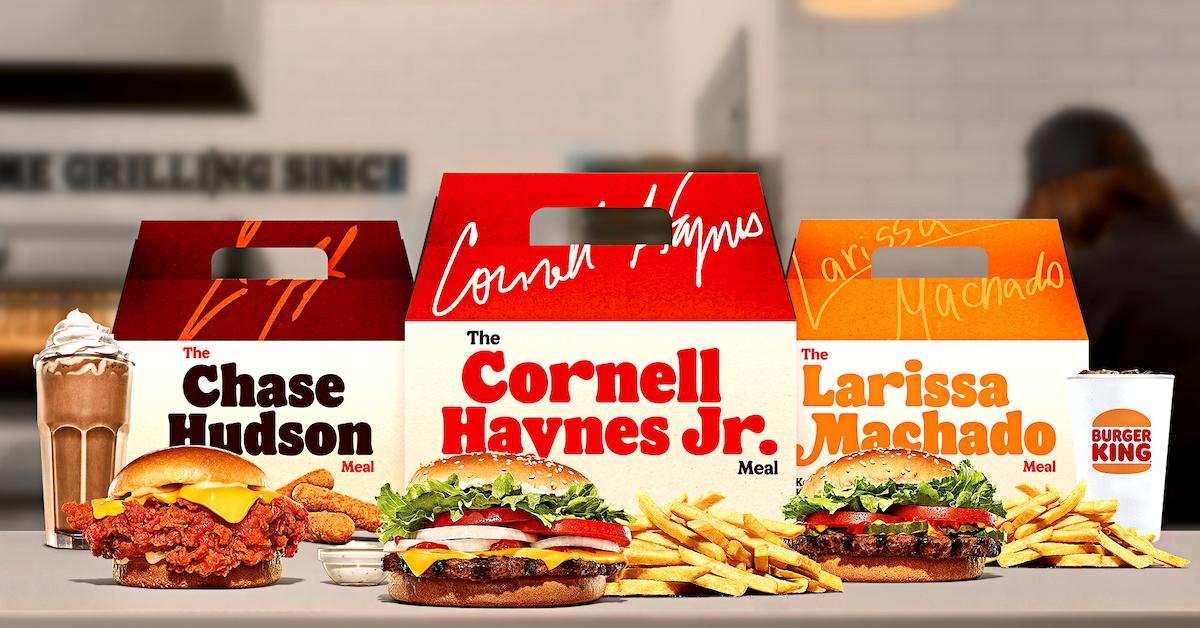 Chicago-based creative agency OKRP is now trying to change course. Healthy eating and sustainability will be the next battlegrounds for both brands. The industry is now dominated by a bet on the "three Ds": drive-thru, delivery and digital, as the main channels for future growth.

The global sporting goods market is shaped mainly by the rivalry between Adidas and Nike, which are followed from afar by Reebok and Puma. Both brands have made marketing history by telling powerful stories. Adidas is much older, it was founded by siblings Adi and Rudolf Dassler (who would later found the Puma brand) in Germany in 1924 and began producing the trews that were favoured by the likes of Jesse Owens.

During the 1960s, Stanford student Phil Knight came on the scene and noticed the havoc that Japanese camera imports were making on the American market. After graduation, he founded Blue Ribbon Sports, which began importing shoes from Japan while working on his own ideas. In the mid-1970s, he renamed the company Nike with the iconic pipe in the emblem and signed the first athlete - Romanian tennis player Ilia Nastas. Another milestone came with Michael Jordan, whose popularity skyrocketed. Knight recognized the potential of the then-rookie early on, plus it helped that the NBA banned Nike shoes and Knight very cleverly announced that the brand would pay the subsequent fines for Jordan, which took care of the publicity. 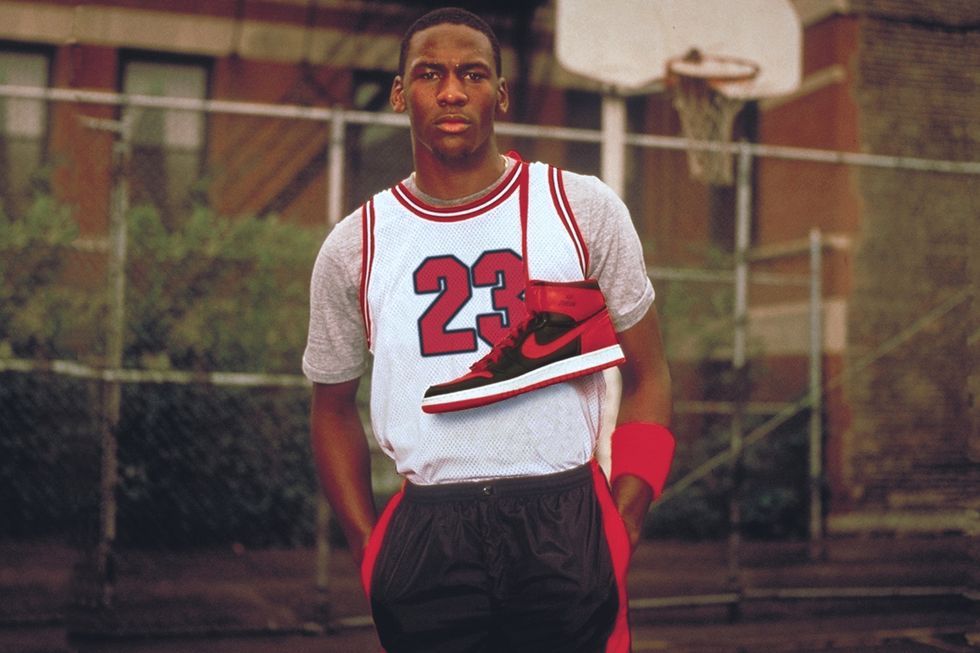 Even nearly 40 years later, the then "Air Jordans" are collector's items and sell for tens of thousands of dollars. Additionally, the popularity of the "keks" has led to the creation of a massive secondary collector's market worth billions of dollars and special editions with, say, Eminem or the Nike Jeezy line with Kanye West.

In 1988, Nike launched one of the most iconic campaigns of the 20th century - "Just Do It". In the 1990s Nike worked on campaigns with agency Wieden + Kennedy, these included "I am Not a Role Model" with NBA star Charles Barkley. "If You Let Me Play" in 1995 focused on the benefits of young girls playing sports.

And while Nike is firmly linked to basketball, Adidas in turn has long dominated the world of football, with partnerships with both FIFA and UEFA and the official ball of the World Cup since 1970, including the legendary Roteiro. It also has partnerships with a number of teams. Nike has not tried too hard to disrupt Adidas' dominance in football. Adidas often collaborates with stars outside of traditional sports: musicians, artists, creators and the like. In the 1980s, for example, the brand collaborated for the hip-hop group Run D.M.C., and the sneakers crossed over into street fashion thanks to them.

The basic principles of Nike and Adidas marketing have remained unchanged over the last two decades, driven by storytelling and collaborations with celebrities and athletes. Adidas has ties to creators like Beyonce, Pharrell Williams and Stella McCartney, while Nike boasts product offerings with Travis Scott, Supreme and Drake. Nike has relied on strong sports and social stories and creative ads for years. In 2018, for example, this included an ad featuring former NFL quarterback Colin Kaepernick, who knelt during the national anthem to protest police brutality and racial injustice and was suspended, with the line "Believe in something. Even if it means sacrificing everything.”

After the ad was published, Nike's brand value rose by six billion dollars. Adidas, on the other hand, embedded environmental responsibility into the DNAbrand by introducing its annual ESG report as early as 2001. It was one of the first to do so and now hopes that it will help with the environmentally conscious Generation Z.


FROM TV COMMERCIALS TO THE METAVERSE

The backdrops against which the battles are fought are also changing due to changes in consumer consumption of content, from TV to digital or OOH. Continued marketing innovation and 'teasing' is now touching new industries such as esports and the mateverse, where brands are investing heavily. Last year, Coke introduced a global "Real Magic" platform focused on gaming, promoting products in the popular game Fortnite, for example. One flavour was therefore meant to taste like "computer pixels"...

Pepsi is trying with its Nitro Pepsi filled with nitrogen. The campaign accompanying its March launch features popular "silent" TikTok comedian Khaby Lame. Like Coke, Pepsi is trying to find its place in the metaverse and the emerging NFT culture.

Nike ventured into the metaverse in late 2021 with a "Nikeland" space on the Roblox gaming platform, and on Snapchat through an augmented reality lens. In December 2021, it acquired RTFKT Studios in an effort to capture early dominance in the NFT bot space. Adidas headed to blockchain project The Sandbox and collaborated on NFT with Bored Ape Yacht Club.